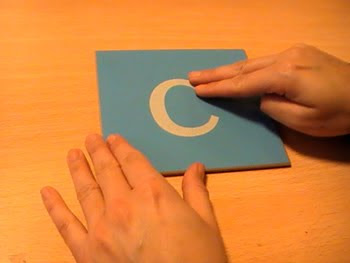 I wanted to breakdown how we teach the children their phonetic sounds and introduce the sandpaper letters. I did this this at our most recent parent / teacher night at the school but I know some parents were not able to come and so I thought it would be a good idea to post it for those who missed it.
Last summer Ms. Wendy and I revamped the entire language section as it was in need of it after eight years. One of the things that I have always struggled with as a Montessori teacher is that I personally find the sandpaper letters boring. Yes, can you hardly believe I am saying that! 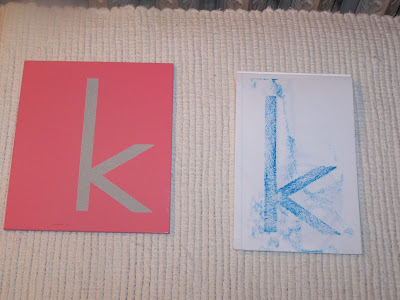 Perhaps it is because I have presented them so many times since I first started teaching. Anyway, I suggested we come up with a new and exciting way to introduce them and expand on the idea of presenting the sounds. I know all to well how important the experience of touching is with this work and so we have expanded on this for the children by adding sound baskets with tiny objects to place with the corresponding sound.
The first picture shows the phonetic sound being presented to the child using the index finger and middle finger for touch. The teacher will 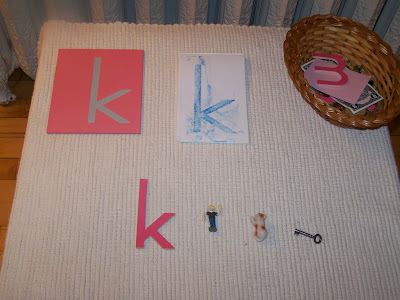 touch the letter and follow it as you would when you are printing the letter. This is helpful and very important especially when a child is learning how to hold their pencil and print their letters. The second photo shows the sandpaper letter and then a rubbing of the letter in the child's sound book. We have all our children keep sound books so that we may review their sounds with them until they have mastered it. Only when the sound has been mastered do we move on to the next sounds.We present three sounds at a time and the sound 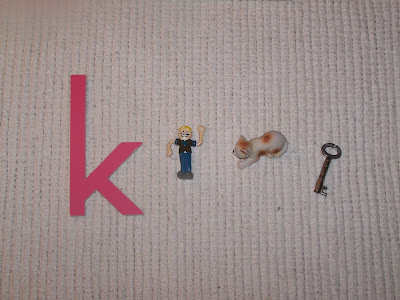 baskets have the same sounds with objects for matching. This is particularly enticing as many children are keen to get into the tiny objects which in the past only accompanied pink three letter phonetic sound boxes. We try and have two or three object for each sound. We have found this to be very successful in our classroom. If you find your child asking what a sign says while you are driving or you hear them sounding out the letters it is probably because of the sandpaper letters.
Posted by Michelle Cleary at 3:46 PM No comments: 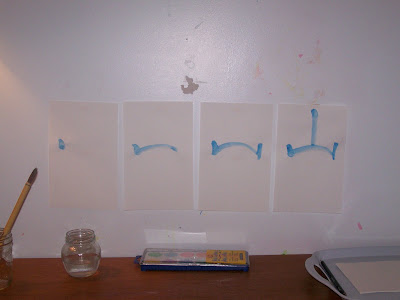 In our Maple Tree Montessori classroom this week we have started offering very simple calligraphy for the children. We have take a chinese character for example, mountain and broken it down into its strokes. We have then displayed the strokes in sequence so that the children can write their own form of the character using a special calligraphy brush and a water color hue of their choice. The children seem to enjoy this activity. The Chinese characters we are employing are an ideogram, a written symbol that represents an idea or object directly rather than a particular word or speech sound. Many of the simpler ideograms often resemble simple pictures of the object they represent.

Posted by Michelle Cleary at 10:02 PM No comments:

A Study in Art 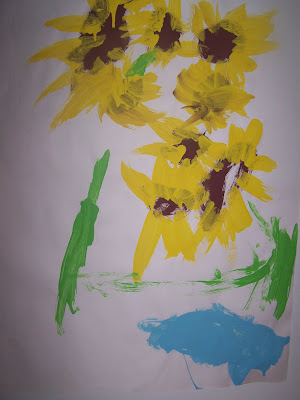 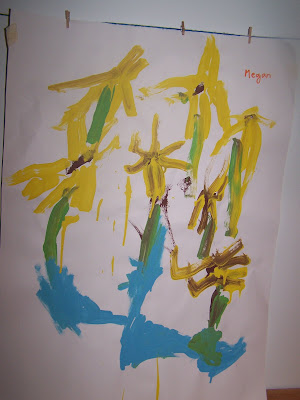 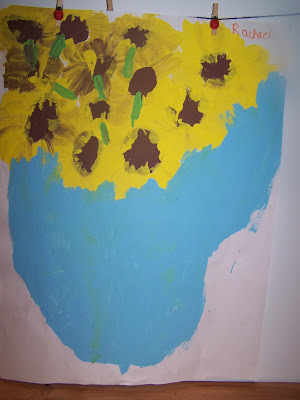 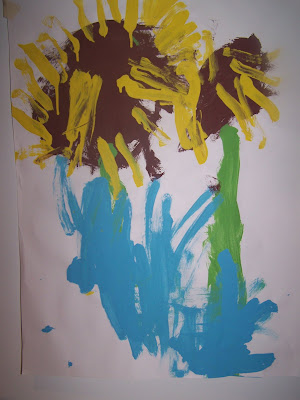 The last couple of weeks we have been looking at Van Gogh's fourteen Sunflowers. We talked about Vincent Van Gogh and showed some of his art to the children. The first week we had a vase of large sunflowers set up with some pastels and card stock so that the children could draw and rub their pictures. The next week we had a directed painting exercise set up at the easel with just four paint colors and an example of the painting done by a teacher. The day I made the painting it was so very funny. The children were packed in tight to me at the easel so much so that I had to ask for arm space. The demand to make a painting was so great you would think that we never allowed painting at mt. What struck me about the exercise is that the children were so very keen to replicate the painting in their own way and they had questions about why I was using green the way I was and what would I use the brown for and how could I make my petals with out my paint running down my paper? So many question and it was truly delightful to answer all of these questions and to offer advice and guidance with the project. I remember one child becoming upset that the brown center was muddying up the yellow petals. I said that it made the picture more beautiful and that it was nice to see it like that and perhaps we could imagine that the sunflowers had been in a shower of rain. I have tried to showcase these paintings in the coat area and I have not rolled them up to send home I just can't bring myself to bend them. Please find them by the art file and take them home. They would make beautiful note cards for Christmas if you had them copied.
Posted by Michelle Cleary at 3:40 PM No comments:

The Art of Fine Dining 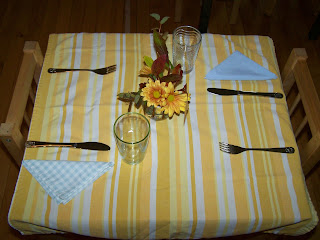 I thought I would send this out so you understand why your child may want to help set the table for dinner. Or perhaps they want to know where the table cloth and napkins are kept? The children at mt know where all our table setting items are kept and they will be on a regular basis setting the tables for lunch. Some children have be doing it for a while now but all children will be getting a turn. I have held off because I wanted to establish the routine of the morning ending and our circle time plus we have had the addition of music with Ms. Susanne and I would never disturb that. Now that everyone is comfortable we will have regular table setting as part of our daily routine again.
Recently we discussed the importance of Order at book club and why children crave and need it. I suggested that some may want to set up their kitchen to make it more accessible to their child and have them help with the process of getting ready for the evening meal. Moving things to lower cupboards and having your child set the table for dinner or help with the washing of vegetables or dishes (i know water every where but you will have a really clean floor after you and your child mop it up). Children have a natural desire to help and feel a sense of accomplishment. So nurture and allow it. It may just turn your dinner time into a really lovely new ritual. When my son was small we use to eat by candle light and with that came very soft voices and lots of talking about our day during dinner. We always had napkins and some times place mats instead of table cloths and flowers. We all looked forward to that time every day. Now we have another ritual of sharing a pot of peppermint tea every evening before bed and we talk about our day. I need to dig out the candles and get back to my old ways for dinner though and you should too!
Recently I found children's sized stainless steel cutlery. I didn't even know it existed and that it could be purchased fairly inexpensively. The cutlery was purchased at Stokes and they also carry it at Cuisina Moderna (just ask for it) it really does make a difference in your child's hands and it is important to know how to use a knife and cut your own food. The table cloths and napkins were made by me and another mom at the school from recycled thrift store sheets. We did try candles but it made for some tricky moments with long hair! I am sure you can well imagine so we just go with the flower arrangement Ms. Wendy makes with the children. Bon Appetit!
Posted by Michelle Cleary at 4:04 PM No comments:

Enrollment Inquiries can be directed to: michelle@mapletreemontessori.ca
We are accepting Enrollment for 2020 now!

Michelle Cleary
Ms. Michelle is a mom to Daniel and Rachael and partner to Shawn. After studying Canadian Studies and Sociology at Mount Saint Vincent University for several years, she left her studies to follow her heart: she got married and started a Montessori diploma program. Ms. Michelle holds a diploma from the Montessori St. Nicholas training centre in England and is also trained in Early Childhood Education. After teaching Montessori in Ontario, she returned to her roots in Nova Scotia, where she started Maple Tree Montessori – out of the basement of her house. That was eighteen years ago. Ms. Michelle is a certified 200 hr RYS Yoga Instructor (2018) and Certified in Children's yoga having completed the Radiant Child Program (2011). Maple Tree Montessori is, and always will be, a very special place for children.